Thinking inside the box

The official records of the first census carried out in Northern Ireland, in 1926, no longer exist.

An investigation by the Public Record Office found no trace of the census.

The Department of Culture, Arts and Leisure said the records may have been destroyed during WWII.

Although the main findings of the 1926 census were made public, the paperwork was kept private. It was a significant moment in history – the first census since the partition of Ireland.

Historian Dr Eamon Phoenix said some important information from 1926 has been lost for ever.

He said: “A great deal of social, political, economic history, religious demography – how it compared with the 1911 census, the last all-Ireland census – all of that has been lost.”

The Department of Culture, Arts and Leisure said: “PRONI (Public Record Office in Northern Ireland) undertook an investigation of our own correspondence in relation to the 1926 census, and found no evidence of that census ever being transferred to PRONI.

“We can confirm that the 1926 census returns for the north are not held by either PRONI or NISRA (Northern Ireland Statistics and Research Agency).

“The records are understood to have been destroyed, possibly during World War II. The next census records held by PRONI date from 1937.”

Dr Phoenix admitted that news of the missing census did not come as a complete surprise.

He said: “There had been rumours since the 1950s that the 1926 census was actually pulped and burned during the war as part of a waste-paper campaign, apparently without any authorisation.

“This had been forgotten, it became something of an urban legend in historical circles, but it’s now emerged as fact.” 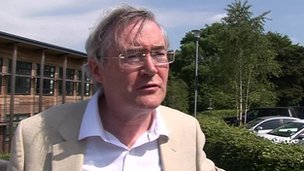 Dr Phoenix said the destruction of the census during war-time was also not totally surprising.

He said: “There was a great move on during the War to use metal railings to recycle them for armaments, for example.

“Waste paper was to be destroyed, it was a fire risk in the Second World War and of course Belfast was famously blitzed in 1941.

“So one theory is that after the Blitz, when 1,000 people died and the centre of the city was ravaged by the Luftwaffe, an order went out from someone saying ‘look burn anything that’s a fire risk’ and someone perhaps in the Registrar General’s office destroyed it.”

So what has been lost?

He said: “We’ve lost the first recording of the community in Northern Ireland after partition.

“We lost information on the movement of population – Catholics leaving to join the new Irish free state for example, Protestants moving in from the border counties – Cavan, Monaghan and Donegal.

“Where people were actually born, all of that has been lost and we have to wait until the 1930s for the first take on the population for Northern Ireland.”

It is not the first time an important document from the early 20th Century in Belfast has gone missing.

Last year, it emerged that the historic first page of the Ulster Covenant signed by Sir Edward Carson at Belfast City Hall in 1912 cannot be found.

Spring: time to examine your lifecycle

The benefits of a local business service

The New Year is often a great excuse to clear out and start afresh. With…

Free Guides
For a no obligation discussion about how your business can benefit from outsourced document management, have a chat with Simon Barber…
SPEAK TO SIMON
Copyright © 2010-2021 | Company Registration No: 1866222 VAT | Registration No: 130 3806 09 | Registered Office: Bishopbrook House, Cathedral Avenue, Wells, Somerset BA5 1FD
Forms protected by reCAPTCHA · privacy & terms apply. Terms & Conditions | Privacy | Website by Pete Marshall
Back To Top